The North Carolina workman compensation laws are intended to be “fair and just,” especially when 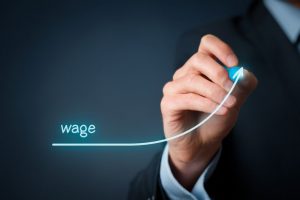 But what does that mean exactly?

Plaintiff lawyers work hard to ensure clients are fairly compensated for long-term losses, permanent injuries, and lost wages due to being out of work.

Employers and their insurance company (if there is one), generally seek to limit paying out large damages claims.

If possible, employers may seek to limit if not eliminate liability altogether by denying the claim, challenging whether the accident is work-related or “in the scope of employment.”

We regularly help employees after the employer or an insurance carrier on behalf of the employer deny the nature and extent of damages, the resulting medical bills, or refuse to make payment for permanent injuries – Kevin Jones, NC Work Comp Lawyer

Example of a Workmens Compensation Claim/Case

The injured employee, the “plaintiff” in a claim against her employer, is a nurse’s assistant.  She works part-time.

Plaintiff is promoted to a new position, where she works full-time with a single patient with special needs and a history of violent outbursts.  Her new hourly rate is increased to $10.00 per hour.

On her first day on the job in the new position, the patient pushes the Plaintiff down a flight of stairs.

As a result of that intentional tort (an assault and battery), the Plaintiff is injured.

Although still in pain and suffering from some level of loss of motion in her shoulder and hands, the Plaintiff continues to work.

The Plaintiff needs the job and knows the patient, despite a history of violent outbursts, still needs care.

There are several different methods for establishing the AWW – Average Weekly Wage as set forth under N.C.G.S. §97-2(5).

Can I get Workers Compensation for the Coronavirus?

The Industrial Commission, when appropriate, may calculate the Average Weekly Wage by dividing the employee’s earnings by the weeks worked before the accident.

Unfortunately, that is not always “fair and just.”

It does not reflect Plaintiff’s true losses and/or lost wages.

The North Carolina Court of appeals has ruled it would be unfair and unjust to ignore a pay increase and/or a change from part-time to full-time status in calculating lost wages.

The NC Worker Compensation Law §97-2(5) authorizes calculation of the Average Weekly Wage by “such other method” that will, but not for the on the job injury, “most nearly approximate” the employee’s wages.

In the example here involving the nurse, especially given she continued to work despite her injury, the Average Weekly Wage may include all wages earned both before and after the injury.

By dividing the total earnings of that period by the total number of days worked, the Industrial Commission may calculate the Average Weekly Wage.

The primary purpose of N.C.G.S. §97-2(5) is are lost-wages damages that are fair and just to both the employee and the employer.

Wages earned, both after and before her injury, including full-time and part-time hours must, therefore, be considered.

Considerations of the Workers’ Compensation Act in North Carolina

After rulings made by the Industrial Commission, appeals of legal issues are taken to the NC Court of Appeals.

Thereafter, if either the Plaintiff or the Defendant (the responding employer) wish to appeal further, the proper venue would be the North Carolina Supreme Court.

Should I Hire a Workers’ Comp Lawyer?

Obviously, any appeal to the Court of Appeals or Supreme Court must necessarily have legal grounds.

While the Work Comp laws in North Carolina can at times seem “cut-and-dry,” there are instances when in negotiating a settlement, the parties must consider what is “fair and just.”

The Workers’ Compensation Act accounts for the uniqueness of claims and the individual parties.

No two cases are exactly the same.

As such, calculating a “fair and just” Average Weekly Wage must allow for equity to both sides.

In unique fact patterns, the “fifth method” of calculating an AWW in North Carolina §97-2(5) allows for discretion and a common-sense approach for calculating damages.

“It’s relevant to note the Average Weekly Wage, and it’s the calculation of lost-wages after an accident, may affect the overall value of the claim if the employee suffers a serious, permanent injury – Kevin Jones

The fair and just application of the NC Workers Comp Laws are subject to occasional dispute, even among reasonably minded parties.

In part that’s because the facts of each person hurt in an injury are unique to the employee, their injury, and their individual medical condition.

What’s the Value of a Work Comp Case in North Carolina?

We firmly believe it makes sense to hire a lawyer in both presenting a claim for a workplace injury and settling things like lost wages, future damages including the inability to work, loss of function, loss of range of motion, and wrongful death claims in North Carolina.

Everything discussed during the conversation, even if you ultimately decide not to retain an attorney for your Work Comp claims, is protected by the attorney-client privilege.

You may also email Kevin Jones at  Kevin@DodgeJones.com