On the job accidents and how they’re handled in the court system is controlled by something called the Workers’ Compensation Act. In North Carolina, our General Assembly adopted laws that take “fault” out of the system.

That’s true whether the employee caused his own accident and even in instances when the employer is negligent.

That can be both good and bad.

It’s a balancing process of sorts. It’s a compromise between the interests of the injured employee and those of the employer responsible for covering the financial aspects of workplace accidents.

And as is the case with most good compromises, there are positive and negative aspects of the law for each side.

“The whole point of the Workmens Compensation Laws is to expedite the process, to remove accidents from the normal process of litigation. In some ways that works well and in others, not so much”

North Carolina remains one of the last states in the nation to recognize a defense known as Contributory Negligence. “Contrib” stands for the idea that if you are even slightly at fault for your own injuries, you get nothing.

Contributing to damages or injuries, due to fault or negligence, exacts a high price. Because of that, insurance companies, employers, and their insurance adjusters used to look for was to deny claims utilizing a fault-based analysis.

If they could show the employee contributed to their own injuries, that would prevent payment of things like lost wages, medical bills, and even long-term disability claims for loss of limb or even wrongful death.

As you might imagine, that could be a tremendously profitable thing for employers and their insurance companies to do. And because of that, the sole recourse for the injured employee in wrongfully denied claims was to sue the employer, to take them to court.

That resulted in cries from employers of “frivolous lawsuits,” and the costs of litigation, ignoring the fact that they too may have been substantially negligent.

To settle PI cases, the vast majority of states in US use some form of what is referred to as comparative negligence.

While there are different types and levels throughout the country, comparative negligence laws allow for the apportionment of blame or fault. Recovery is predicated on the percentage of responsibility, at least in part.

Some states allow for compensation in personal injury claims up to and including 50%. That means the Plaintiff may be able to recover damages up to 50% of their losses, assuming they’re 50% or less at fault for their own accidents.

Other states are “pure comparative negligence” in format, meaning damages are paid based on the percentage of fault, irrespective of whether that exceeds the 50% + threshold.

A plaintiff in such a jurisdiction may still recover at least something, (understanding that may be a greatly reduced amount), even if they are substantially at fault.

Each party bears the weight and responsibility for their own actions. It’s not a “winner take all” philosophy.

One way to end the perpetual disputes over injury claims and litigation in the courts, at least as they may involve workplace accidents, is remove them from the process altogether.

Under the NC Work Comp laws, there is no consideration of fault or negligence. As such, it doesn’t matter if you as the employee were in some way responsible for your own injuries.

Of course, that’s true too for the employer. If the workplace conditions were dangerous and the employer knew about it, that too doesn’t really much matter under the law.

There are always exceptions to the law. That’s true under the Act as, in a very, very limited number of circumstances, there may be traditional avenues for recovery utilizing the courts.

But, for the vast majority of workplace accidents and injuries in North Carolina, those are handled through an administrative law process involving the NC Industrial Commission, Deputy Commissioners, the “full Commission,” and the Courts of Appeal.

That can be both good and bad for the employee.

At the same time, they also employ somewhat of a “carrot-and-stick” approach to that. There is an incentive to get healthy and return to work.

That “incentive” is to give people a less money than they’d receive if they worked. If you were hurt on the job, as to wages, you’ll get only 2/3rds of what you’d normally receive.

The Comp Laws in NC essentially cut your pay by a third, hoping that will get you back to work quickly as possible. The good news is that taxes are not taken out of that 2/3rds amount.

Frankly, that’s tough. If you’re out of work because you’ve been hurt, you shouldn’t really be worrying about paying your bills and providing for your family.

As such, such an “incentive” to return to work is actually a dis-incentive to even file claim in the first place. Some people just can’t afford to go through the healing process and miss work.

They chose to work while hurt, which may result in a more severe, subsequent injury that takes even longer to heal.

The Workers’ Compensation Act is intended to cover all workers and all workplace scenarios. Coverage is extended to just about all employees.

Employers are therefore not given many options. They can’t choose to “opt out” of Workers’ Compensation.

They either purchase insurance for workplace accident claims or prove they have enough resources to be “self-insured.”

In North Carolina, it’s a cost of doing business.

That doesn’t mean claims are paid automatically or without problems. Insurance companies still do their best to avoid paying damages. That’s what they do.

If they can think of some way to weasel out of paying, they’ll try to employ that strategy. Indeed, that’s one reason the General Assembly set up under the Act what is a pretty complicated set of laws and rules regarding how claims are filed and paid.

And if legitimate claims were always paid, there wouldn’t be the need for Worker Compensation Lawyers. We’d be out of business.

The truth is, as long as insurance adjustors and insurance companies are involved in the process, there will be litigation of one sort or another.

The difference in North Carolina is where that litigation takes place. Instead of clogging up the court system with lawsuits for on the job accidents, we use a system involving the Industrial Commission.

From the employer’s perspective, that can be a hassle. By removing fault from the process, they believe the floodgates opened, inviting frivolous claims under the Act.

In setting compensation at 2/3 of the normal weekly wage, thus resulting in a form of penalty for being out of work, it’s hoped laying out of work for a bogus claim is not profitable.

It also must be a bit frustrating for an employer to think, “I did everything right. They hurt themselves. Why should I be the one to pay for that?”

Of course, in North Carolina, it’s a bit of a disingenuous argument because it ignores the fact that even if the employer is 99% at fault, under our Contributory Negligence Laws, the employee would get nothing.

If the employee was 1% at fault (negligent) for their own damages, they’d get zero. At least to us, that doesn’t seem fair at all. 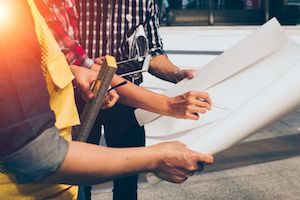 Kevin grew up in coastal North Carolina. Kevin attended high school in Carteret County. He lives in Morehead City with his wife and two sons.

Kevin Jones went to law school because he wanted to help people. After graduating from Campbell Law School, then in Buies Creek, he returned home to help his friends and neighbors.

Kevin has focused his entire career on helping hurt people. He is the co-founder of the Dodge Jones Injury Law Firm. His law firm never represents insurance companies or employers.

All consultations are free and confidential. You may reach Kevin directly by email at: Kevin@DodgeJones.com